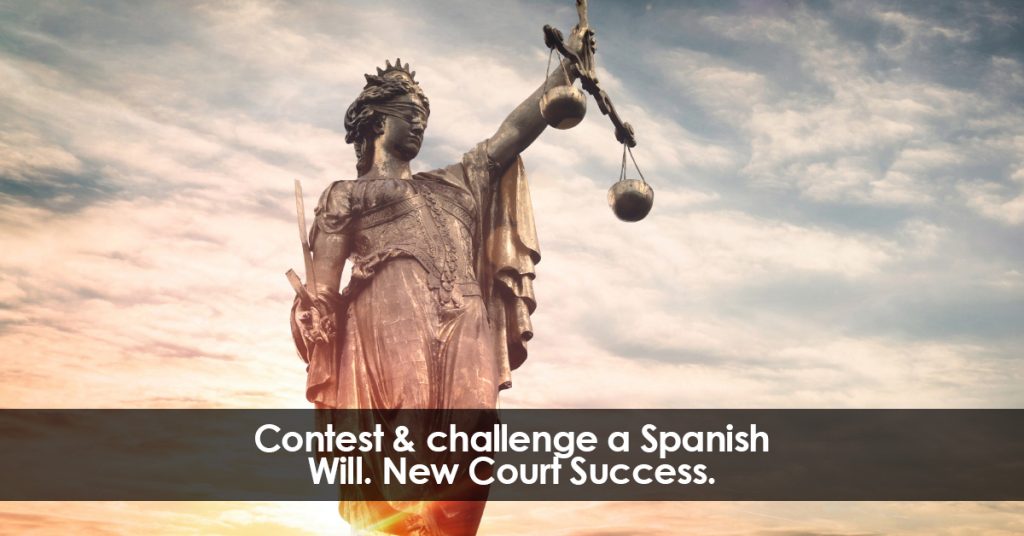 In today’s article, we want to talk about how to contest and challenge a Spanish Will, and a recent court success. Our law firm has represented the heiresses (daughters) of a British woman, who left everything in her will to her husband, of another nationality.

As per our court claim, the court has recognised our clients, the right as descendants, to 2/3 of the assets of the inheritance. All this by application of Spanish law, and the compulsory rights (forced heir rights) that it provides for descendants.

You can consult this court decision on this like: DECISION SPANISH COURT CONTEST A SPANISH WILL.

Can Spanish law apply to the inheritance of an expat or foreigner in Spain?

Spanish law does not always apply to inheritance relating to foreigners (non-Spanish nationals) in Spain. That will depend on many factors: such as the deceased nationality, place of residence, etc.

Date of Death The person’s date of death is very important.

Thus, if she died on or after 17/8/2015, European Regulation 650/2012 will apply to her inheritance. And Spanish law will be applied, in principle, if the deceased had her domicile, at the time of death, in Spain. Unless she had made a Will opting for the law of her nationality. Or the transitory provisions of the regulation apply to the case, in relation to Wills granted prior to the entry into force of said regulation.

Who can challenge the Will? Who can claim rights as legitimate or forced heirs?

According to Spanish law, are legitimate or forced heirs, that is, they are entitled to a part of the inheritance, normally the descendants (children, grandchildren, etc). And in the absence of them, ancestors and spouses.

Thus, according to Spanish law, descendants can normally claim approximately 2/3 of the inheritance.

Recognition of forced succession rights to children excluded on the Will. In the case of a British deceased.

In the case indicated, although it is true that the deceased was British, her national law was Scottish. Both Scottish law and the law of England and Wales, state that it applies to succession:

In the said case, the civil code was applicable (death prior to August 2015). And although the applicable law was the one of the nationality of the deceased (Scottish law), that, renvoi or forwarded Spanish law, as the one applicable. Because, Spain was the domicile of the deceased, and where the real estate was located. Thus, being applicable Spanish law, although the Will excluded daughters; they have the right to 2/3 of the inheritance, as they are forced heiresses. That is what we requested and what the court has recognised in the indicated court decision.

If you wish to contest and challenge a Spanish Will or ask for its annulment, or to have your rights recognised as an heir in Spain. Or you want to protect your Will in order to do not be contested, contact us and we will help you.

The information provided in this article is not intended to be legal advice, but merely conveys information relating to legal matters.

Challenging, disputing or contesting a Spanish Will

Challenging and contesting a Will in Spain. Grounds for disputing a Will, How to contest, challenge and dispute a Will or Testament. Spanish Probate and Will Laws.

Contesting and challenging a Spanish Will worded in Spanish signed by a foreign non-Spanish speaker that was not translated.