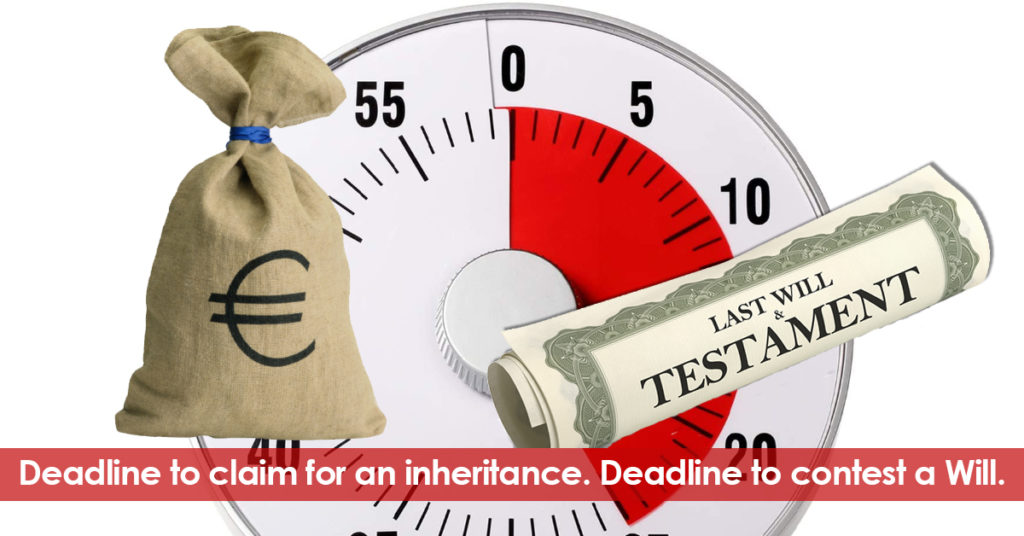 WE regularly receive enquiries concerning the deadline to contest the will and the inheritance involved with it but the answer is not a simple one as it is essential to know the different legal actions that must be followed.

There are a number of reasons why a will can be challenged and one of the most common, as we have pointed out in other articles is preterition.

Preterition is when what is known as a ‘forced heir’ is not mentioned in a Will, which means that in some country’s laws, there are certain people who cannot be legally excluded from the inheritance such as children and spouses and in many countries qualify as forced heirs.

Thus, in laws such as Spain, France, Belgium, Italy, etc., children must be included in a Will and they can only be excluded or disinherited for very specific reasons.

Consequently, if the law of these countries applies to an inheritance, the Will must respect the rights of the legitimate or forced heirs. Otherwise, said heirs, could challenge the will, due to their preterition. That is, for not being included it in the will, when they are legally entitled to inherit.

Other laws, such as those in England and Wales, do not provide for forced heirs, therefore, a Will cannot be challenged by preterition.

There are however other causes to contest a will: lack of capacity of the testator, error, etc.

Term of the preterition action and challenge of the disinheritance: normally, it is understood that the deadline or statutory limitation period is four years.

Deadline to claim an inheritance.

Connected with the possibility of contesting a will, is the action of petition or claim of inheritance.

The inheritance petition action, although very important, is not expressly regulated in the Spanish civil code, although it is mentioned in several articles.

Using this approach, the heir requests that their condition as heir is recognised, in order to claim their rights over the certain assets forming part of the inheritance, which have been granted to a third party, normally other heirs.

The fundamental understanding behind this action, by virtue of article 1963 of the Civil Code, is that the deadline to claim is 30 years.

It is very common, and accepted by the Spanish Courts, that this action is accumulated with others, such as preterition. This would mean that in many cases, the term for challenging and contesting the inheritance, Will could, in practice, be increased to 30 years.

If you need advice on the deadline to contest the will and the inheritance., or related matters, Contact Us.