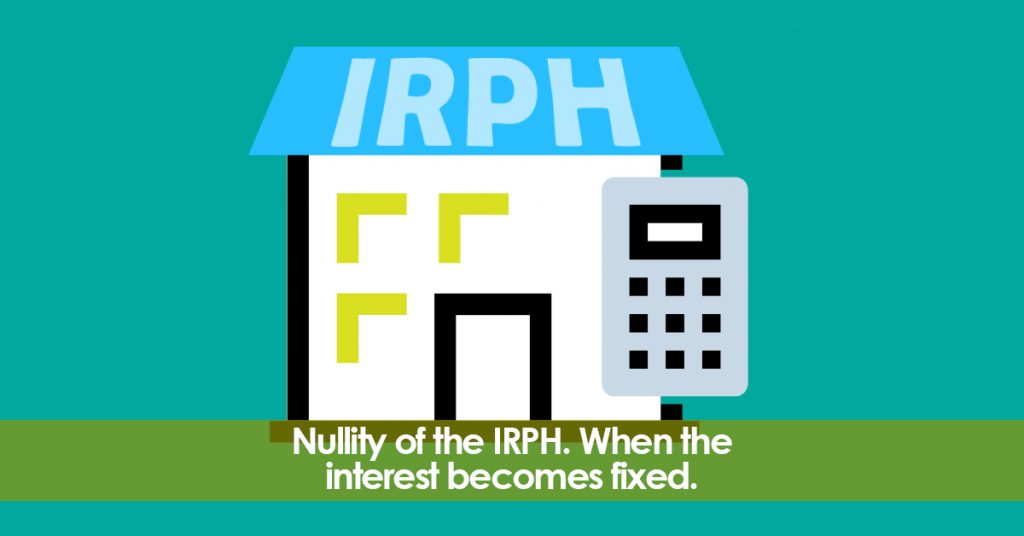 The average rate of mortgage loans for more than three years, for the acquisition of free properties; granted by credit institutions in Spain.

Invalidity of the IRPH clause in some cases

Some mortgage loans contain an interest clause, which referred to the IRPH of banks or savings banks, which disappeared. And on the loans, it is established that if these disappeared, the loan would be governed from that moment, as per the last calculated interest, before the elimination by law of this IRPH.

Thus, these loans are contrary to the 2013 law indicated. Because, when the IRPH of banks and savings banks disappeared, they had to refer to the IRPH of Entities. Or to the Euribor if that was agreed in the mortgage loan.

But this is not the case, as the bank established in its clause that the last interest that could have been calculated would be applied, for the rest of the loan.

The typical examples of this kind of clauses are:

First, it is stated that the interest would be calculated according to the IRPH of banks.

Second, they said that if the IRPH for banks disappears (which happened in 2013) the IRPH for savings banks would be applied. Which also disappeared.

Finally, it is indicated by the bank, that if the two previous indices disappeared, the last calculated interest would be applied, for the rest of the loan.

The reason for the invalidity of this type of IRPH clause

Thus, this type of IRPH clause is being declared null. And the reasons are the following.

1. They are contracts where instead of replacing the IRPH of savings banks and banks, by the one indicated by the law of 2013; it is replaced by another interest. Therefore, it does not fulfil the law.

2. In addition, when these IRPH have disappeared, the last interest of the last revision calculated before the disappearance of the year 2013, applies to the rest of the loan. This means that it becomes a fixed rate loan. That goes against the aim and the nature of the contract. Well it was a variable interest loan.

That in addition to the arguments indicated, this clause itself is not transparent. Well, in the event of the disappearance of the IRPH indices, the loan becomes fixed, without the consumer having been sufficiently informed of the consequences.

Legal consequence of the invalidity of this type of IRPH clause

The legal consequence of the nullity of this type of IRPH clause is:

– Application of the IRPH of Entities, according to Law 14/2013, instead of the last interest rate calculated.

– Recalculation of the amortisation table and return of the overpaid.