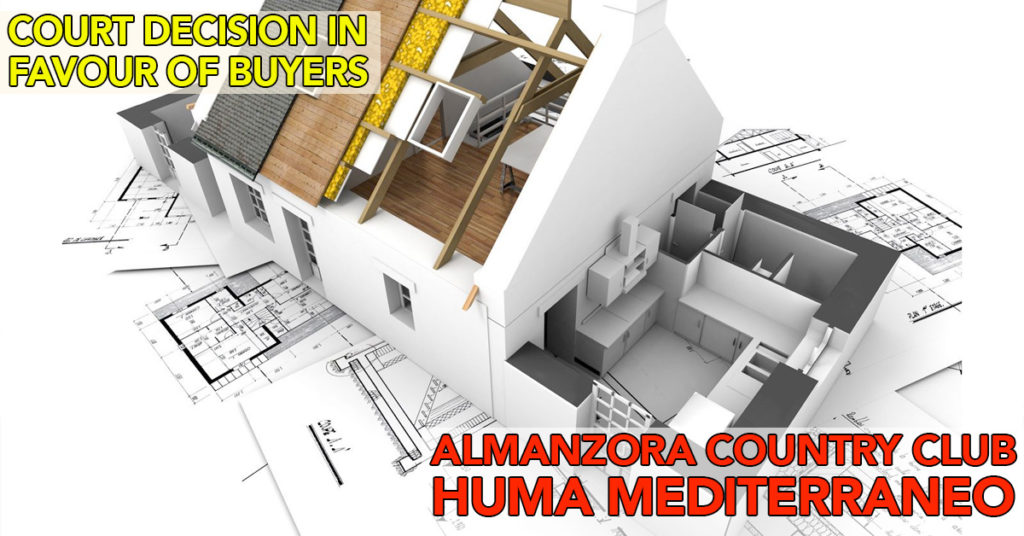 The good news continues for those affected by the purchase of properties at the Almanzora Country Club. The Provincial Appeal Court of Murcia, in a judgement issued on 10th of March 2016, and recently notified to our office, has confirmed the judgment we won before the court of First Instance number 4 of Totana, in the Ordinary Proceedings number 494/13.

The Provincial Court confirmed Bank Popular as the entity that had:

-opened the account in which buyers deposited their payments,

and so should return buyer’s money paid to the developer Huma Mediterraneo, plus legal interest from the time when the payment took place, even though the consumers did not have an individual guarantee, all under the Law 57/68.

Whilst it is true Law 57/68 has been repealed with effect from the date of 1st January 2016, by the Law 20/2015, regarding management, supervision and solvency of insurance and reinsurance companies, the new law change can not affect those affected by Almanzora Country Club, since the events occurred prior to the entry into force of the new law, and

certain consumer’s rights cannot be waived, as per the general principle of non-retroactivity, noted in Article 2.3 of the Civil Code which states that “the laws have no retroactive effect unless stated otherwise”.  We therefor understand that those affected can claim under the Law 57/68.

In the court case to which we refer above, most of those affected have already had their money returned, since we had asked for the provisional execution of the judgment obtained against the Popular Bank, thereby recovering about € 300,000.

So, if you bought a property off plan in the complex Almanzora Country Club (ACC) or any other promotion, and they have not handed over the property, nor returned the money paid, you should know that you can claim for the money back from the bank or insurance company that signed the collective bank guarantee or insurance policy (even if you do not have an individual guarantee).

If there are no such guarantees or group policy, you could still claim back against the bank who opened the special account for the promoter into which the amounts paid by the buyers were deposited.

Do not hesitate, now is the perfect time to claim, if you have lost money buying a property off plan in Spain, our firm will help you, so contact us.