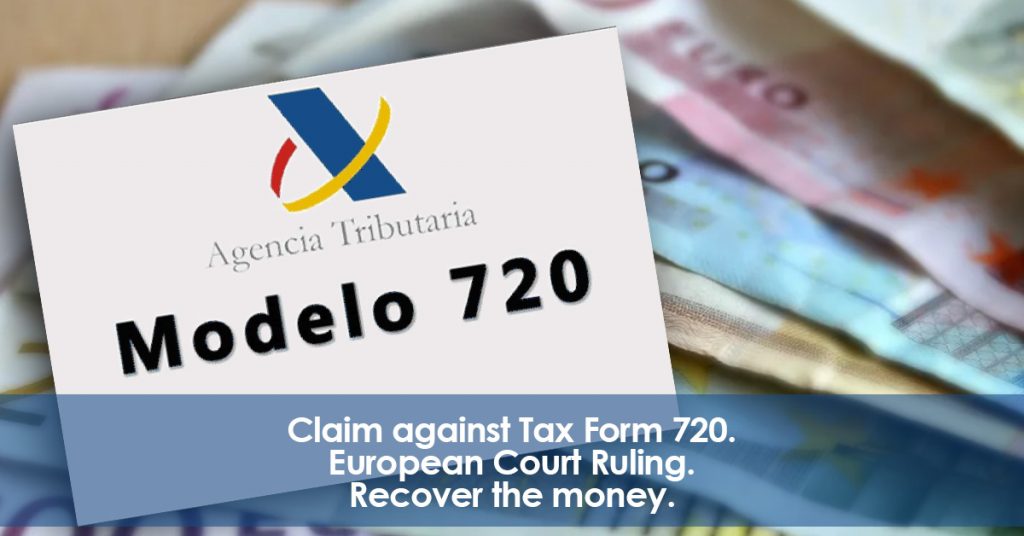 In October 2012, the Tax Form 720 was approved in Spain. Its objective was simple: provide information on assets located abroad and reduce tax fraud. To this end, it established an extremely severe penalty regime, with fines of up to 150 per cent. Recently, the Court of Justice of the European Union has declared that this model is contrary to several European regulations. In today’s article, we analyse how the tax form 720 worked. The content of the European Court’s ruling, that declares this tax form illegal. And whether it is possible to recover the money and claim against tax form 720 for the penalties imposed so far.

Tax form 720 is an informative declaration of assets and rights located abroad. It must be filed every year between the first and the last day of March. It applies equally to individuals and legal entities and it can only be filed in one way, electronically.

Residents in Spain are compelled to submit it when the total amount of their assets in any of the following groups exceeds €50,000:

Furthermore, when there is an increase from one year to the next over €20,000 in any of these groups, it will be mandatory to file the tax form again.

One of the most controversial aspects of tax form 720 was its severe penalty regime. Filing the form after the deadline. Filing it incompletely or with false data. Or filing by other means than electronically were considered very serious tax offences. The sanctions established were as follows: €5,000 for each piece of information not declared (with a minimum of €10,000). And for the undeclared profits, penalties of 150 per cent of the amount defrauded. To top it all off, it was also stipulated that undeclared profits were not subject to the statute of limitations.

The Court of Justice of the European Union has declared that this tax is contrary to several EU laws. This radically changes the landscape.

On the one hand, it has forced Spain to modify the tax (something that the government has already done). The fixed penalties have been reduced (€150/€200) and the non-applicability of statute of limitation has been removed (offences can no longer be prosecuted after four years). In addition, the penalties for undeclared profits have been reduced to 50 per cent of the amount defrauded.

On the other hand, this ruling has opened the door to claim against form 720 for all taxpayers on whom penalties were imposed. However, each case must be studied in detail. We find a fairly recent example in the Madrid Economic-Administrative Court. The Tax Agency has been ordered to refund a taxpayer the €500,000 for the penalty imposed on him for not filing a tax return.

If you have been sanctioned by the Tax Agency due to the 720 tax form, we will study your case and offer you expert advice on the matter. Contact us.