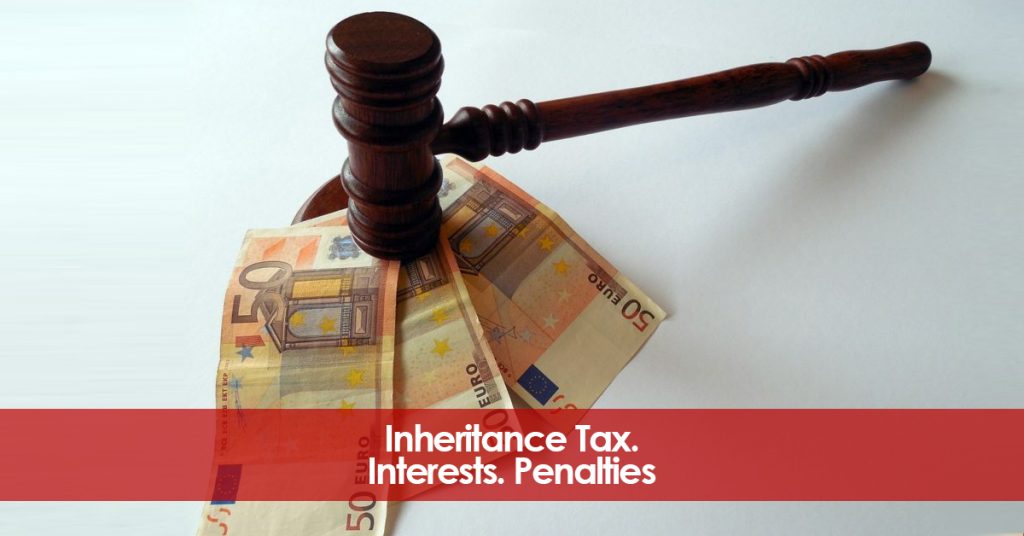 Inheritance Tax. Interests. Penalties. In today’s article, we are going to try to explain in a simple way, what happens when we pay inheritance tax after the deadline.

According to the Spanish inheritance law regulations, the tax must be paid within six months, counting from the death. Or, where appropriate, when the declaration of death becomes definitive.

Extension of the term for the payment of the tax

The indicated period could be extended for another six months, that is, up to one year from the death. This extension must be requested within the first five months after death.

In all those cases in which the IHT it is not paid within the first six months, delay interest will accrue on the amount of the tax to be paid. Delay interests are approved annually by the public administration, and for example for the year 2021 was fixed at the rate of 3.75 per cent per year.

These interests will accrue from the end of the initial six-month term, until the actual payment. And they will accrue even if the extension of the tax has been submitted.

When the tax declaration is submitted after the deadline, in addition to the delay interest indicated, some penalties or surcharges will need to be paid.

These penalties are those established in article 27 of the Spanish General Tax Law, which has been modified recently. Before they were 5 per cent, 10 per cent, 15 per cent and 20 per cent.

According to the current wording, the penalties for filing the tax after the deadline (provided there is no prior requirement from the administration), will be:

“A percentage equal to one per cent plus another additional one per cent for each full month of delay with which the self-assessment or declaration is presented with respect to the term established for filing and payment.”

That is, if the delay is less than a month, 1 per cent will be paid. If it is between one month and two months, it will be 2 per cent, etc.

This article provides that from 12 months, the penalty or surcharge is 15 per cent + the delay interest of article 26 General Tax Law.

Penalty and extension of the tax:

In the event that the extension has been requested, the penalty will only start to count from the end of the extension. That is, 12 months from the death.

Therefore, in principle, inheritance tax in Spain must be paid within six months of death. If we do not know for sure if we could pay the IHT tax on time, it is advisable to request the extension, which will give us six more months: ie up to one year. If we pay beyond the initial six months, we will have to pay late payment or delay interest. And if we pay beyond the extension period, we will have to pay penalties or surcharges.

The information provided in this article is not intended to be legal advice, but merely conveys information relating to legal matters.

Inheritance Tax in Spain. Tax Benefit based on residency of the deceased.

Living outside the EU should not mean paying more taxes in Spain. Brexit a new decision by Spanish Supreme Court minimizes its effects.