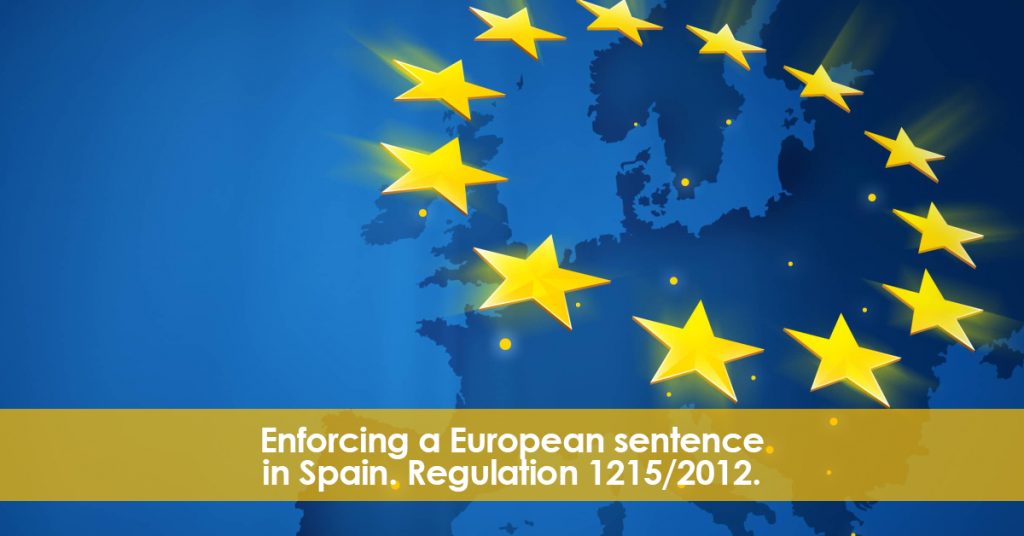 Let us use the following example. A French citizen files a lawsuit in France against a Spanish company or private individual with Spanish nationality. After the trial, he obtains a favourable judgement in his favour. However, it is not possible to enforce it in France since the debtor does not have any assets there. Nevertheless, the condemned does have assets in his home country, Spain. Is it possible to enforce, in Spain, the judgement pronounced in France? The answer is clear. Yes. In today’s article, we discuss the European Regulation 1215/2012, one of the most important European regulations on the enforcement of judicial decisions. We explain how enforcing a European court order in Spain works.

Implementation, material and territorial scope of application and main innovations.

Regulation 1215/2012 became effective in 2015 and has been a real step forward in relations between EU countries.

It applies to both civil and commercial matters, with some minor exceptions. For example, all matters related to matrimonial property regimes, personal capacity, social security, etc. are excluded. With regards to its territorial scope, it is applicable in all EU countries, including Denmark.

Main novelty: enforceability without the need of an exequatur.

Perhaps the most noteworthy aspect of Regulation 1215/2012 is the creation of an agile and swift system for the recognition of judgements. Since its implementation, enforceable rulings dictated in any European state, will enjoy the same enforceability in the rest of the Member States. And for this, no declaration of enforceability (exequatur) will be necessary, as was the case until now.

What courts are competent to execute it?

The courts with jurisdiction to enforce judgements handed down abroad are the First Instance Courts of the place where:

1. The defendant’s domicile is located.

2. The assets of the defendant that are to be seized are located.

What documentation is required?

Article 37 of the Regulation sets out the requirements for the application to succeed. In order to enforce a ruling given in another Member State, the following documents must be provided:

– On the one hand, a copy of the sentence, which meets the requirements to be considered authentic.

– A certificate issued by the court that pronounced the sentence, using an annexed form provided for in the regulation itself (Art. 53).

It is important to bear in mind that the court before which the foreign judgement is to be invoked may request a translation of the foreign judgement. Depending on the specific circumstances of each case (judgement issued in absence of the defendant, opposition, etc) the process may vary slightly, with additional requirements, so that each case must be studied in detail.

Conclusions: scope and effectiveness of the Regulation

It can be argued that, in addition to the free movement of persons, capital and goods, now it finally exists a genuine circulation of judicial judgements. It represents an enormous progress in European integration, as it speeds up the process considerably. Furthermore, it has also helped to minimise costs, which in many cases will be limited to a translation of the judgement to be enforced.

Enforcing a European court order (or sentence) in Spain is possible thanks to Regulation 1215/2012. If you have obtained a judgement in your favour in a Member State and you wish to enforce it in Spain, do not hesitate to contact us. We will study your case in detail and offer you expert advice on the matter.

The information provided in this article is not intended as legal advice, but merely conveys information related to legal issues.

Succession Law Probate. European Parliament’s proposal on international Inheritance. The applicable law. The need for citizens from countries with freedom to testate: UK, Ireland, etc. to review their Last Spanish Wills Contesting a Will.

Wills and inheritance of expatriates (British, Irish, etc.) in Spain. Some clarifications on the European Regulation 650/2012.