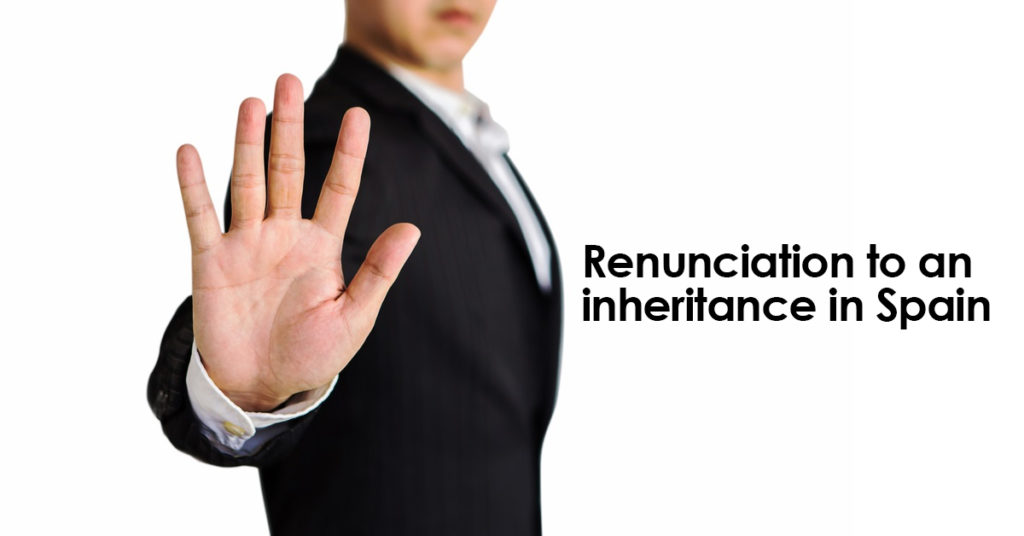 In Spanish Law when an heir accepts the inheritance in an ordinary way, they are accepting everything, both good and bad, that means not only all the deceased’s property and assets, but also the deceased’s debts.

Thus, it is possible for the heir, when debts are higher than the value of the assets or inheritance / estate, to renounce or reject the inheritance, ( I think it is also known in English as disclaimer of interest ). Unfortunately, this is becoming more common as a result of the economic crisis. According to the General Council of Spanish Notaries, waivers and renunciations of inheritance in Spain have doubled since 2007.

If you want to renounce an inheritance in Spain, you should know that according to Spanish Law, the waiver must be total, it cannot be partial, i.e: you cannot renounce only part of the inheritance.

Furthermore, according to Article 1008 of the Spanish Civil Code, the repudiation of the inheritance shall be in a public or authenticated document (instrument) or in an application submitted to the competent court to decide on the succession.

Therefore, if you want to renounce or repudiate an inheritance, you must do it expressly and usually in a public document granted before a public notary.

If you do not live in Spain and you want to repudiate a Spanish inheritance, you can do it before a Public Notary in your country, or in front of the Spanish Consulate in your country, because the consul or authorized person has notarial faculties.

It is very important that you know that the renunciation is irrevocable as per Spanish Law, therefore, once it is done, you cannot change your mind, unless there is an error, or a new Will appears, etc.

From a fiscal or tax point of view, it is very important to note that if a person renounces an inheritance in a pure and simple way, in principle, they will not have inheritance tax to be paid.

But if you renounce in favor of a person, it would be taxed twice, first, it would be the inheritance tax which corresponds to the person who renounces, and second, the beneficiary of the waiver will pay Gift Tax for the value of what they are receiving. Therefore, before giving up an inheritance in favor if someone else, the tax implications must be considered.

Sometimes a renunciation could be tax convenient. For example, if the testator in a will leaves everything to the spouse, and indicates in the will that if the spouse is not able to inherit for whatever reason, such as if the spouse wants the property to go directly to the children, they could renounce said inheritance and probate rights in a pure and simple way, meaning that the children would inherit directly.