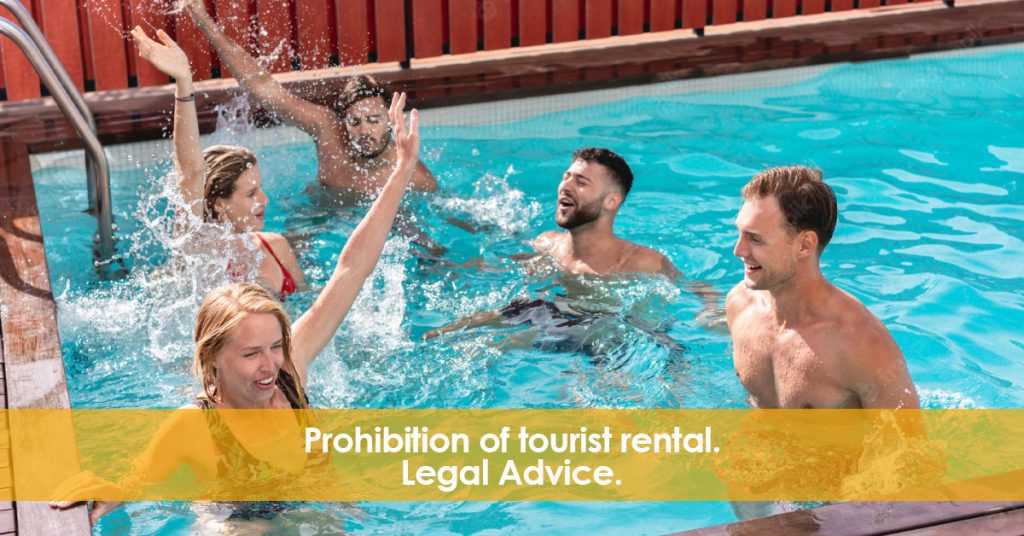 In March 2019, the modification of art. 17.12 of the Horizontal Property Law was approved. With this reform, it became possible to limit or condition tourist rentals in communities of owners. This was a response to a growing problem. Noise, uncivil behavior and other disturbances generated by tourist rentals. The news was received with relief by many communities, who felt that this type of rental had considerably altered their harmony. Three years later, we analyse what has happened with the prohibition of tourist rentals in Spain.

The first doubt raised by the wording of the law was the real scope of the modification. Although the reform was sold by media and politicians as the possibility of “prohibiting tourist rentals”, eventually, article 17.12 LPH only mentioned “limiting or conditioning”.

When it comes to determining what exactly the community owners can agree on, the ambiguity in the wording of the Law has caused quite a few problems. According to the RAE (Royal Academy of the Spanish Language) to limit means to impose limits, to delimit or confine. On the other hand, to condition means to make something dependent on a condition or to influence the development of something. In any case, both terms do not coincide exactly with the meaning of prohibit, which clearly means to prevent the execution of something.

Is a qualified majority really enough?

The second problem that seems to have arisen over time is even more worrying. The reform establishes that in order to approve the agreement, it is required that the vote is in favour of 3/5 of the owners that also represent 3/5 of the quotas.

However, in recent years, several voices have argued that this majority may not be adequate. As we explained in our first article, in these cases two different rights collide. The right of the owners of a property to use it for whatever purpose they wish (tourist rental is not an illegal activity itself). On the other hand, there is the right of neighbors not to be disturbed in their daily lives by tourists who only think of having fun, and do not respect the rest of others.

Despite the fact that the law only requires a vote of 3/5 of votes and quotas, the advocates that defend that such an agreement actually requires unanimity are gaining more and more traction.

Jurisprudence: the first rulings on the issue are pronounced.

We have recently become aware of a judgement of the Court of First Instance of Cordoba that touches on this issue. Firstly, the judge harshly criticises the ambiguity of the wording of art. 17.12 LPH. He also points out that tourist rental is not a nuisance in itself. Therefore, it is a little bit excessive to “preventively” prohibit it. Especially because private property and freedom of enterprise are constitutional rights. Finally, it declares the agreement approved by the community to be null and void.

The reasoning is clear. art. 17.12 LPH does not allow the prohibition of tourist rental (it only allows to limit or condition it), so the majority required for its approval would be the one established in art. 17.6, that is, unanimity.

Is the Land Registry registering agreements approved by 3/5 of quotas and votes?

A key component of the process of prohibition of tourist rental is the registration of the agreement in the Land Registry. If the agreement is not registered, it has no effect and cannot be enforced against third parties. However, the decisions of the different Land Registers in Spain on this matter are diverse. Some are registering agreements approved by 3/5, others are systematically refusing its registration. The reason they argue is that the “prohibition” exceeds the scope of art. 17.12 LPH, which only allows to limit or condition.  Therefore, they only accept agreements approved unanimously.

Until the Supreme Court rules, it is foreseeable that litigation and contradictory interpretations will not cease. Unfortunately, this is not expected to happen for some years. In the meantime, the uncertainty surrounding this issue advises caution when preparing meetings that deal with this issue. It is advisable to pay special attention to the wording of the agenda items and the minutes, etc.

If you live in a community of owners in which an agreement to prohibit tourist rentals is going to be discussed, do not hesitate to contact us. We will offer you expert legal advice. Contact us.

The information provided in this article is not intended to be legal advice, but merely conveys information relating to legal issues.

Problems with property rented to tourist in community of owners. Legal possibility of prohibiting the tourist rental or increase the community fees.