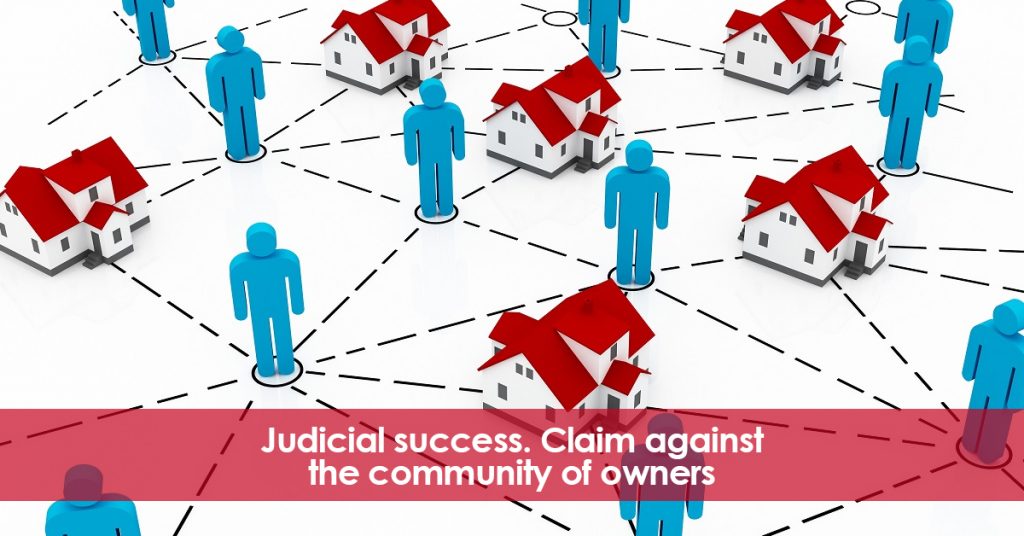 COMMUNITY of owners’ associations are often a source of problems for the coexistence between neighbours. Excessive noise and late-night parties that prevent the rest of the residents from sleeping. Disturbances generated by tourist rentals. Neighbours who become debtors by not paying the community fees, etc.  In today’s article we analyse a new legal success. In connection with the refurbishment of the façade and terrace, a neighbour filed a claim against the community of owners. We defend and absolve the community and the plaintiff is ordered to pay all the legal costs.

Elements of a communal nature, but of private use by the neighbours

Before examining the judgement, a brief clarification on an issue that often causes confusion. The elements of a communal nature, but of private use. The clearest example is frequently the terraces of the upper floors. These are generally elements whose only access is the house of a private neighbour. However, even though some neighbours have exclusive use over them, they remain communal elements.

Chronology of a real case: The refurbishment works approved by the community of owners and the opposition of a neighbour

The community approves the works of refurbishment on the façade and on the terraces. A few months later, the workmen hired by the community access the terrace through the façade and begin the works. However, the neighbour who has the privative use of this terrace (and who voted against the agreement) interrupts the works. Without allowing the communal workers to finish the works, he expels them from the terrace. Afterwards, at his own risk, he hires another company to complete the repairs. A year and a half later, this neighbour lodges a claim against the community, claiming nearly €6,000 for the jobs carried out at his discretion.

According to art. 1968 of the Spanish Civil Code, the statute of limitations for the exercise of the claim is one year. Therefore, when the plaintiff filed the lawsuit against the community, the action had already expired.

Are the community agreements binding for all the neighbours, including those who vote against them?

Yes. The community agreements approved in the Community meetings are of mandatory compliance for all the neighbours. Not only that, but they are also fully enforceable from the moment they are adopted. Meaning that, if any neighbour considers an agreement to be harmful, or contrary to the law, he or she must challenge it before the courts. In the case in question, the plaintiff neighbour merely voted against the agreement but did not initiate any kind of legal action.

Jurisprudential doctrine of ‘own acts’

The courts have repeatedly established that no person can behave against his or her own prior actions. This is known as the doctrine of ‘actos propios’. This is exactly what happened in this case. At first, the neighbour refused to allow the community workers to complete the works, kicking them off his terrace and forcing them to leave the works not finalised. Later, he claimed the payment for the completion of these works carried out by another company.

As a result of all the above, the judge dismisses the claim against the community of owners, ruling against the neighbour, and sentences him to pay the legal costs.

In White Baos Abogados, we are experts in legal advice to communities of neighbours and Horizontal Property Law. If you would like more information on this subject, please do not hesitate to contact us. We will study your case and we will advise you on the preparation of meetings, adoption of community agreements, etc. You could check the court decision mentioned on this link.

SPANISH REAL ESTATE LAW: Communities of Owners. Owners (bare owners) and Holders of the Usufruct: Who must pay the community fees? and who is entitled to attend and vote at the community meetings?

Community of owners/home owners associations: Exclusion or use cut off of common community services to owners / Neighbours not paying their community fees.

Community Debts and the liability of the new owners