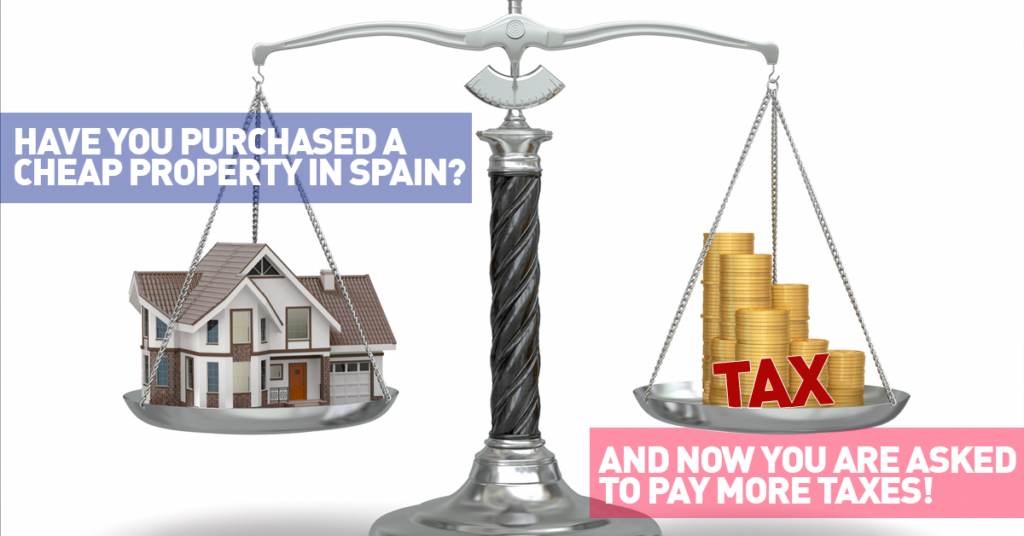 A few months ago I bought an apartment and a villa in Spain, both resales, in the province of Alicante (Costa Blanca), for a very good price, both were real bargains. Now a few months after, I have received a letter from the tax authorities, Hacienda, saying they believe that the value of the purchased property is higher than the declared price, and are asking me to pay more tax. Is this legal? Can I do something?.

Dear reader, thank you for your enquiry.

It is common in this time of crisis find a real estate “bargain”, but is also very common that after purchase and signing the relevant deeds, the buyer receives a notice from the Taxman of the region where the property is located, indicating that the declared value is less than the real value, and therefore they request an additional amount of transfer tax, on top of the that already paid, since the declared value is lower than the real value, and theoretically the tax to be paid must be on the highest value.

As explained in a previous article,  in connection with the revised values in Valencian Region by the Oficinas Liquidadoras, there is a very important court decision granted on the 1st of October 2013, judgment number 1336/2013 from the Superior Court of Justice of Valencia, where it was stated that the methods used so far by the administration to check and review the declared values were not adequate, since they were based on cadastral details of the property, and the properties were not visited, so no individual assessments were carried out, etc.

Despite this judgment, the tax authorities continue issuing such Tax Liquidations and Penalties for Transfer Tax (TPO) on second-hand property purchases, as a result of these checks and revision of the “real values”, but after the indicated court decision, the administration has changed its strategy, and now:

1) They make visits to properties (although not in all cases).

We understand that even though the tax authorities have changed the way they act, there are still many possibilities of successfully appealing this new tax revision.  Although their valuations are consequences of administration surveyors visits, they do not respect what was stated in the mentioned judgment, because these valuations are not based on the state and condition of the property, rather they fix the value according to the coefficients and values set out in the annual order. Also we understand that this order, on which the valuation is based, has several formal defects that could even result in its invalidity.

It is important to know, that it is possible to appeal against these  tax liquidations without the need to pay the fine or guarantee the money asked for by the taxman. The way to achieve this is by stating on the appeal claim that we reserve the right to ask for a contradictory expert valuation.  By doing so, we can appeal without paying in advance, only paying at the end of the appeal if we lose it.

If the tax authorities claim against you for an extra payment of transfer tax because they understand that the real value of the property is higher than declared one, do not pay, contact us and we will inform you about your rights.