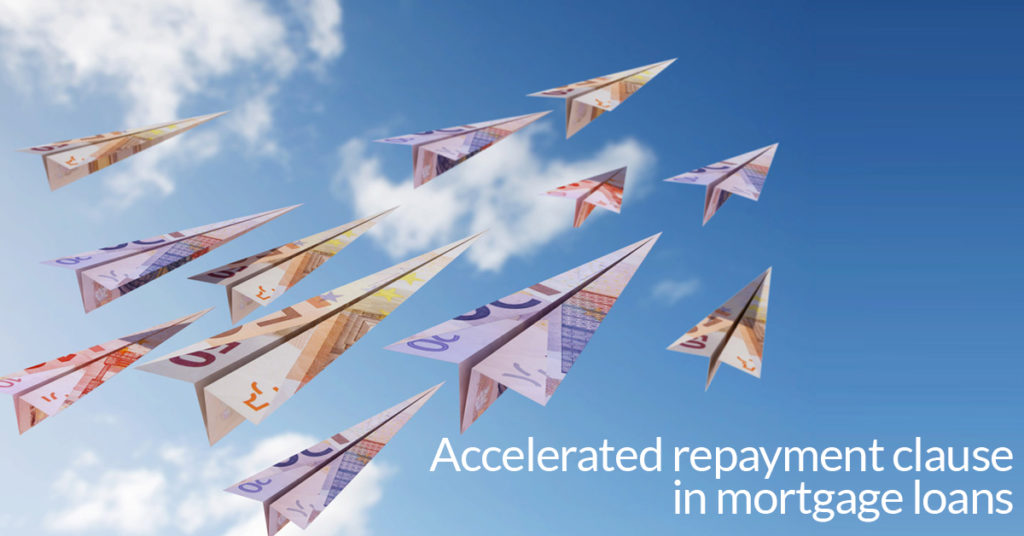 ON March 26 of this year, the Grand Chamber of the European Court of Justice issued a court decision on the accumulated cases C-70/17 and C-179/17, relating to accelerated repayment clause or the early maturity clause contained in the majority of mortgage loans in Spain.

First of all, it should be remembered that the early maturity clauses or the accelerated repayment clause, that used to be included in most mortgage loans are abusive, because they allowed banks to terminate the mortgage loan contract, simply because a delay in payment of one of the loan mortgage instalments.

This is obviously unfair and disproportionate, as it could happen that a consumer had paid all the instalments of his/her loan on time for 20 years, and if for whatever reason, just one of them was paid after a delay, the bank could resolve or terminate the contract, demanding that the entire outstanding capital of the loan to be paid, plus expenses, etc.

This ruling from the ECJ, couched in simple and clear wording that characterises this court clarifies and highlights several very important concepts:

An abusive unfair clause such as the accelerated repayment clause, written in the manner indicated, if it is declared abusive or unfair, cannot be partially maintained by the judge, and should be eliminated from the contract, because the partial maintenance could be harmful to the customer and encourage banks to continue using them (dissuasive effect).

If the total elimination of the abusive clause, does not affect the contract, in the sense that the contract can subsist, it should be eliminated totally.

In cases where the total elimination of the unfair clause, has as a consequence the cancellation or nullification of the contract, because it cannot subsist without that clause and in cases where this involves a particularly adverse effect on the consumer, the court should replace the abusive clause with a new wording in accordance with national laws and taking into account provisions provided in the contract signed between the parties.

As mentioned above, this court decision is interesting because it clarifies several concepts so that all consumers must have clear understanding of their rights, because they are applicable to many contracts that may be signed:

In addition, the court decision has as a further consequences whereby thousands of legal proceedings in Spain will now resume, as they were suspended pending to this ruling of the ECJ in relation to the accelerated repayment clause.

If you have a problem with your mortgage loan contract or any other contract, contact us and we will help you.